Retailing: From A to Z

In this tough economic environment, retailers need all the help that they can get. So, an excellent article from Wilson Perumal & Company on “Complexity in Retail: Why Companies Must Adapt in Order to Survive” is particularly timely.

According to Wilson Perumal: “We’re living in a time of incredible business complexity. Retail was perhaps the industry most affected by growing complexity in recent years – retailers that learned to master good complexity and limit the impact of bad complexity, gained a competitive advantage and beat their competitors. In the past, retailing was a relatively simple business:   You selected the right product range, bought the selected products at the lowest possible price and at the right quantities, merchandized the products in your stores, managed stock availability with supply chain efficiency and marketing efforts, and at the end of the retail cycle you exited old lines with minimal cannibalization. Simple. This simplicity allowed companies… 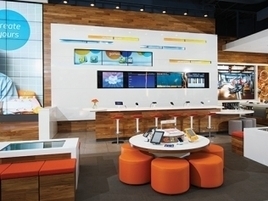 Apple Stores are a worldwide phenomenon – and a huge factor in Apple’s retail and sales success. MacFormat presents their story in stats.

Apple and Microsoft both have their own, dedicated retail stores. Can Google be far behind? If the rumors are true, the answer is “not at all,” with the first Google stores due to open by the end of this year.

Citing “an extremely reliable source,” the gossipmongers at 9to5Google report that the Chocolate Factory is hard at work on plans to open its own flagship stores in “major metropolitan areas” in time for this year’s holiday season.

The stores will reportedly highlight Google’s Nexus devices, the Chrome browser, Chromebooks, and other new products to come, with an emphasis on giving prospective customers the chance to get hands-on with Googly kit before they buy.

About those aforementioned new products: according to 9to5Google’s source, foremost among them will be Glass, the Chocolate Factory’s much-ballyhooed experiment in wearable computing – which makes some sense, considering that few customers are likely to be willing…

Apple doubles sales per sq ft of next closest, Tiffany’s again. In the Apple Stores, Apple is building its image as the most service-oriented company in the computer and consumer electronics industries.

How good is this? PayPal offering price matching to customers who pay with PayPal

PayPal (s ebay) is getting even more aggressive in courting consumers with the rollout of new holiday promotions for cost-conscious shoppers. Now, consumers can get price-matching, free return shipping and six-month financing on purchases online or in-store through the end of the year.

When a purchased product is advertised for less by any merchant within 30 days, consumers who pay with PayPal can get reimbursed the difference. They need to fill out a request and submit a copy of their receipt and the advertisement to get reimburse. Users can get up to $1,000 in total price matching through Dec. 31  and up to $250 on any one item. This applies to airline tickets that go on sale within seven days.

PayPal is also offering free return shipping on products. Consumers who file a claim will get a pre-paid shipping label within five days or they’ll get a refund in their…

Absolutely agree. In a world where smart devices are growing like crazy and (finally!) offer the promise of the right offer to the right customer at the right time, you had better be able to follow consumers as they channel hop and to deliver permission-based, highly relevant and personalized communications.

No doubt you’ve heard of The Human Genome Project–the effort to decode our species by identifying and mapping all of our genes. Ultimately it’s an effort to better understand what makes us tick, from both a functional and physical standpoint.

As a business or brand leader you have a similar challenge when it comes to decoding your current and potential consumers’ attitudes, needs and behaviors.

In a world of vast and growing choices, the pressure is only increasing to develop deep, actionable insight into your customer base.

In a world where most segments are growing slowly, your only chance for out-sized growth is to gain market share. And that requires understanding which levers to pull that are compelling enough to win new clients or grow share of wallet with existing ones.